A little more comic art to analyze. Check this out: 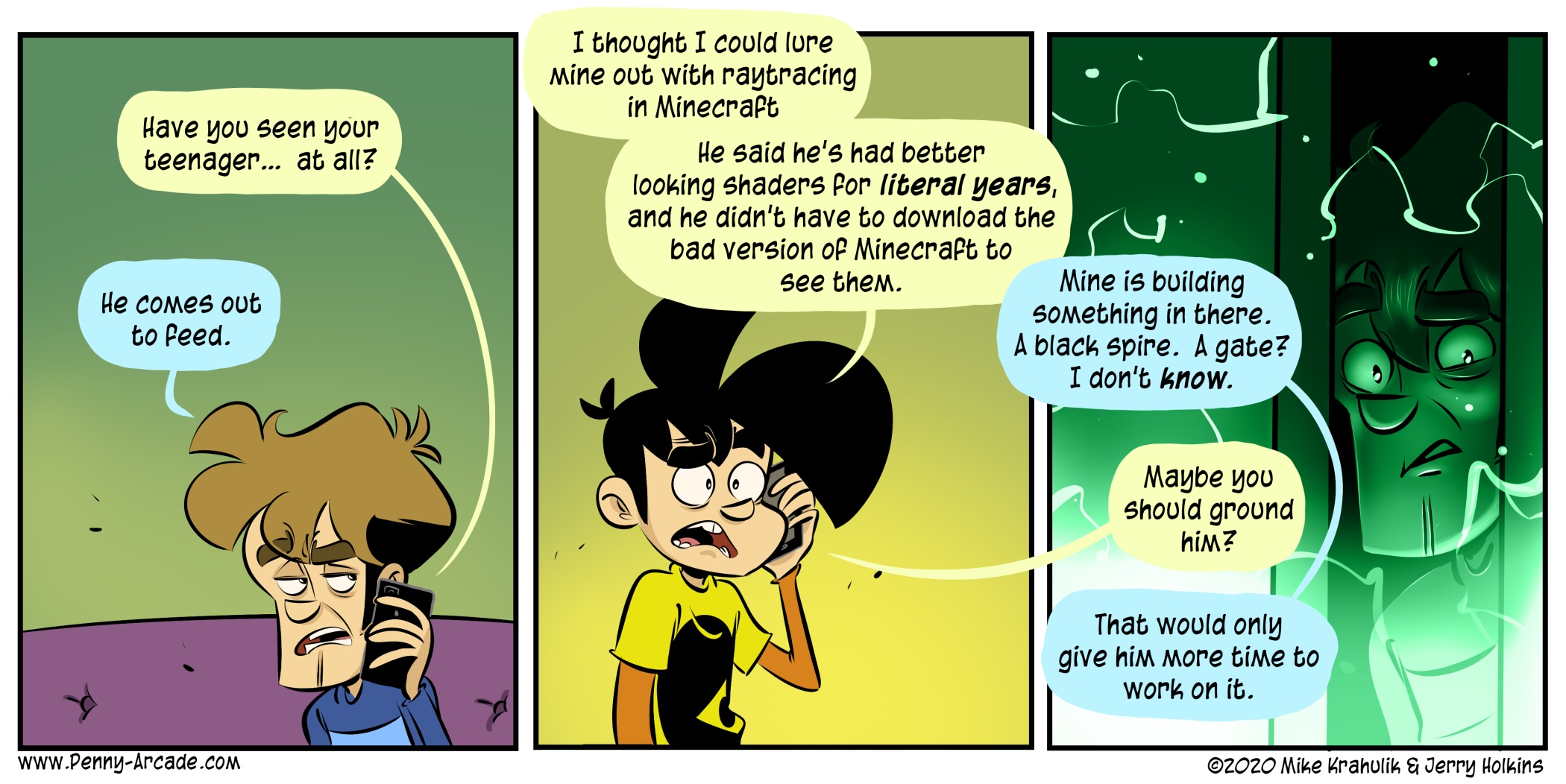 Please visit the original comic at its home at https://www.penny-arcade.com/comic/2020/04/20/teens It’s an artful comic!

Pretty simple, right? These guys make thousands of dollars on their comics, without a big machine behind them, on something they built themselves, from scratch. So they know what they’re doing in the webcomics sphere. Two notes here: comic story pacing, and the communicative importance of the lettering and bubbling.
I’ll start with the second point because it’s my favorite here. It’s so very subtle, but if you note the areas around each word bubble, you’ll see they’re hand-drawn, and that the “swoosh” towards the character’s mouth is deeply, deeply expressive. You never have any question who’s talking. Sometimes the bubble is allowed to go outside of the panel to carry the story forward. Tycho’s blue bubble overlaps with Gabe’s yellow bubble in the third panel to facilitate that, and also because that slight overlap communicates to the reader that we’re still part of the same phone conversation in panel three, even though the art on that page is completely different. That’s brilliant, and again, so subtle. To further emphasize the fact that the same conversation is going on, the speech bubble’s tail for Gabe’s last line of dialogue still returns to the previous panel. The last two lines of dialogue for Tycho don’t have a tail towards his mouth in the third panel, demonstrating to us that the image in the third panel isn’t part of the ongoing action (the phone conversation) and instead that the conversation is ABOUT the third panel. This could get confusing, except that the speech bubbles are carefully color coded, so you know, with the light blue lines, that it’s Tycho talking. All of these subtle details rush through the reader’s mind without even getting noticed–and these ninja art techniques build the story without drawing attention to themselves. This is why I have so much respect for good lettering, and it is good lettering and speech bubble art that really distinguishes between a comic artist skilled at sequential storytelling, and someone who can just draw good covers and figures. Next, for pacing, notice how the art drives the punchline here. The picture at the end has a completely different art style, emphasizing the dialogue about an arcane ritual. The writing, obviously, has to be funny, for this kind of short strip, and there are four jokes in the writing, one per panel and an extra one at the end. These guys are known for doing the “extra punchline,” either by adding an extra, awkward panel after the first three panels, or, more subtly, writing in an extra joke. It’s this extra punchline, in the partnership between the art and the writing, that drives their success. And they spend a great deal of time brainstorming and talking to get these points perfect–I highly, highly recommend their podcast to anyone interested in sequential art, even if you’re not trying to make something funny, because they know how to tell a story. I’m still haunted by their un-funny, serious comic on gun violence debaters versus video game silencing advocates, and the amazing punchline: “it is a strange kind of patriot who would take away the first amendment to protect the second.” I reflect on that to point out that this kind of stuff doesn’t just work for funny or crude–it’s just dang good storytelling. So if you work with a team, maybe consider brainstorming panels together sometimes, instead of just the writer building a script for the artist to interpret. Script writing and interpretation are vital skills, of course, for the industry, but it’s also a good skill to be able to sync so the writing and art play off each other perfectly. If you’re a writer seeking an artist, I have a free pdf about 26 different websites where you can find someone, including FB groups, that I’d be down to share. And feel free to discuss or analyze anything else you see in those panels! Let’s continue making stuff better every day. If you found this analysis helpful, you might also appreciate my free marketing booklet, where I go over like 50 tips and tools you can use to make your social media and sales marketing more automatic and successful, turning this into more of a passive income venture so you’ve got more time to create. Best of luck, buttercup!

« How to be a hero during COVID19 – FOCUSED solutions instead of mass blanket rules (Ft. Coronavirus Care Fund For Domestic Workers) #dogood #socent #superheroalert
8 Thought-Provoking Quotes from Becoming Hero (About the Comics Character out to shoot his author) #inspirationalquotes #becominghero »